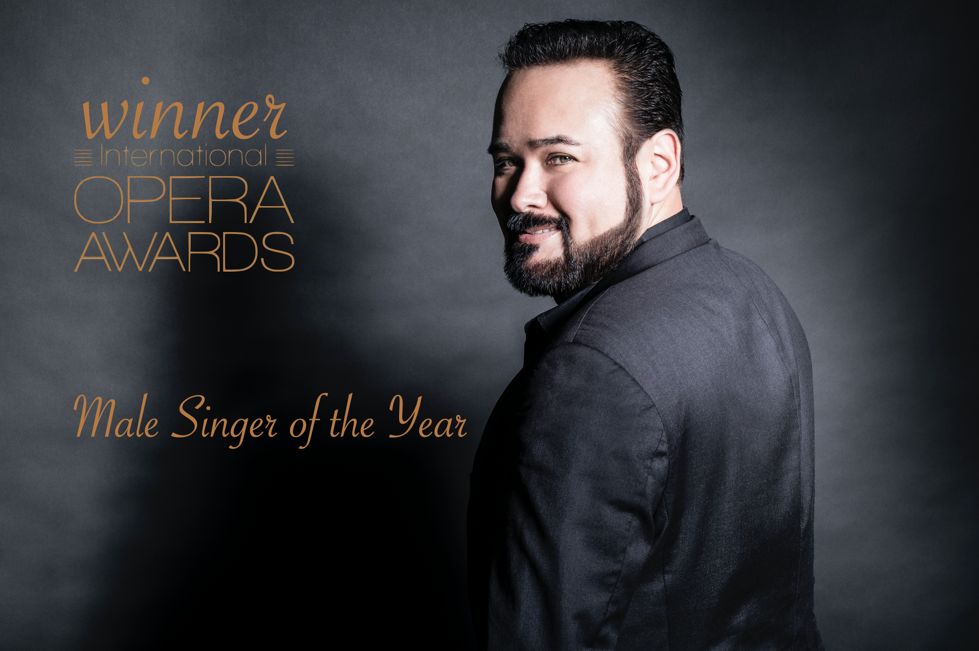 Javier Camarena, recently honored by the prestigious International Opera Awards as Male Singer of the Year, has positioned himself as one of the most sought-after artists performing, to resounding success, in most of the world´s leading opera houses and concert venues.

He is the only singer in history to sing a bis in three different productions at the MET: Don Pasquale (2014), La Cenerentola (2016) and La Fille du Régiment (2019) where he achieved the unequaled feat of doing so in all seven of his performances, one of which was broadcast in the MET Live in HD.

His 2021-2022 will include concert tours in Mexico, Spain and China as well as productions at the Royal Opera House, Opernhaus Zurich, Gran Teatre del Liceu and the MET.

In spite of the pandemic´s grave impact on his 2020-2021 season, he nevertheless was able to perform in La Fille du Régiment at Vienna´s State Opera and as the Duke of Mantua in Rigoletto in Florence; to offer concerts in Spain at Teatro Real and his debut at Palau de la Música Catalana in Barcelona; and to participate via streaming at the Donizetti festival in Bergamo and at the MET´s New Year´s Gala. He also recorded Il Pirata in Italy alongside soprano Marina Rebeka.

His 2019-2020 season included performances of Lucia di Lammermoor at Bayerische Staatsoper in Munich; Puritani at Bastille in Paris; L´Elisir d´Amore at Teatro Real and Opernhaus Zurich; La Cenerentola at the MET; Don Pasquale at the Salzburg Lent and Summer festivals; and La Fille du Régiment at Palacio de Bellas Artes in Mexico City. Furthermore, he offered concerts in Spain, France, Italy, the United States and Mexico.

Among his many distinctions, Camarena has received the Opera News Award (2020), the Bellas Artes Opera Medal, the ISPA Distinguished Artist Award and the Mozart Medal (all three in 2019). In 2014, his hometown Xalapa awarded him the Sebastian Lerdo de Tejada Medal as distinguished citizen. For the last few years, Líderes Mexicanos has included him in their list of Mexico’s most prominent leaders at both national and global levels, and Quién magazine named him as one of 50 leaders transforming their nation.

Camarena’s discography includes one solo title with Decca Classics, Contrabandista (2018), exploring the life and music of legendary Spanish tenor Manuel García, the first album of the Mentored by Bartoli series; as well as three solo titles for Sony: Recitales (2014), a live recording of arias by Rossini, Scarlatti and Donizetti with songs by Mexico’s Agustín Lara, María Grever and others; Serenata (2015), a collection of songs by Lara and other Mexican composers; and a traditional children songs album titled Javier Camarena canta a Cri Cri (2016).

He made his professional debut at Bellas Artes, as Tonio in a 2004 staging of La Fille du Régiment, after which he was invited to join Zurich’s International Opera Studio under the mentorship of fellow tenor Francisco Araiza joining the ensemble of said opera house in 2007. Four years later, he made his debut at the Metropolitan Opera as Rossini’s Almaviva, which became one of his signature roles; others include the same composer’s Don Ramiro and Comte Ory; Mozart’s Belmonte and Ferrando; Donizetti’s Nemorino and Arturo; Verdi’s Fenton; and Bellini’s Elvino. Equally celebrated for appearances at San Francisco Opera, Paris Opera, Barcelona’s Gran Teatre del Liceu, Dresden’s Semperoper, and the Vienna and Bavarian State Operas, the tenor has collaborated with such eminent conductors as Claudio Abbado, Marco Armiliato, Maurizio Benini, Bruno Campanella, Giuseppe Finzi, Daniele Gatti, Fabio Luisi, Zubin Mehta, Evelino Pidò, and Franz Welser-Möst.

Born in Xalapa in Mexico’s State of Veracruz, Javier Camarena studied with mezzo-soprano Cecilia Perfecto at the Universidad Veracruzana before completing his musical studies with honors under Hugo Barreiro and Maria Eugenia Sutti at the University of Guanajuato. In 2004, he took first prize in Mexico’s Carlo Morelli National Singing Competition, and the following year he won the Juan Oncinas Award at Barcelona’s Francisco Viñas Competition

Happily married, with two children, he lives in Zurich, where his hobbies include painting, cooking, movie-going, video-gaming and travelling with his family.